Story of the Week 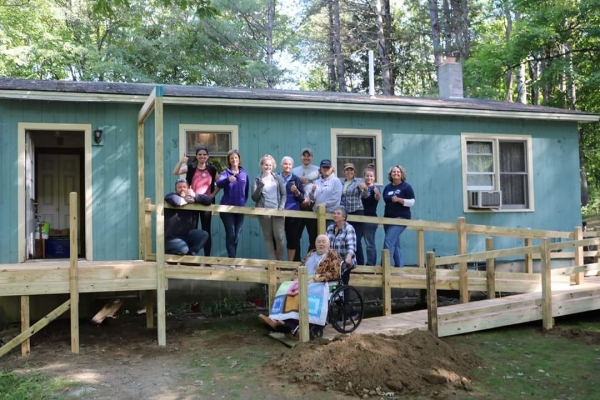 My first day as an AmeriCorps member, I built a ramp for Herbert. He had been a contractor, so it was important that all the angles be square, and the supports be strong. He watched us, with a slight smile on his face, most of the afternoon on the three days of work. I am sure he would have supervised us all morning as well, but his wife said the pain meds put him to sleep for a long time. He was not receiving treatment anymore, just medication to ease the pain.

The couple’s son and son-in-law were also skilled builders. They helped us put the ramp together and construct a small tin roof over the doorway. They told us how they had gotten “Herbert “out of the house with a bucket loader if he ever had doctor's appointments. He had not been out of the house for any other reason in almost a year.

On the last day, Herbert's wife guided him out of the house and down our ramp to meet the earth.

"This will change everything," she said. She told us that the ramp was not just for Herb, that now their relatives could come and, she implied, say their goodbyes. As we left, he was sitting in his wheelchair at the top platform under the tin roof. John, our construction supervisor, joked that rain and acorns falling on the tin would be deafening.

Later, the wife sent us a note thanking us and the volunteer. She described his excitement on the first day after we left. He was able to wake up at 8:30 to go outside and enjoy the fresh morning air. "He even enjoys the rain on the deck," she said.

A few weeks later, Herbert passed away. However, the ramp stands, a testament to the love of his family and his community, and to the joy of his final days. Accessibility is a gift that no one deeply appreciates until it is gone. So, when I build a ramp I am reminded of Herbert and I take great pride to be passing on that gift.